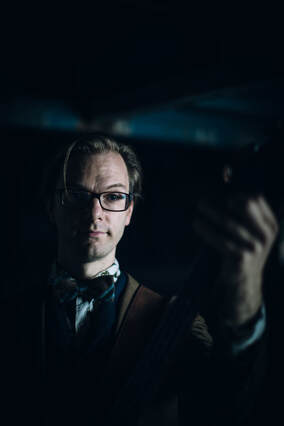 Photo by Jamie Croft
Dan Peter Sundland is a unique electric bass player and composer active in the jazz and improvising scenes in Norway and Berlin. His playing is set apart by his expressive, wide ranging playing techniques, including cello-like bowing and a varied palette of percussive colours.

Nominated for ECHO Jazz Newcomer of the year 2017 with Clara Haberkamp trio.

Dan Peter Sundland is simply outrageous on the electric bass. Words aren't enough. You have to see him play!
​- Kresten Osgood

Sundland's electric bass is like few others, with lines and tone qualities inspired by acoustic bass players, at the same time as he with great imagination employs the guitar-like possibilities of the electric bass in his orchestral palette.
- Petter Petterson, Jazznytt No. 6 2011